The interview covers a number of topics, including his influences, when he started to turn pro and how he handled the Covid lockdown.

But one question posed at him was about the timing for the recognition for talent such as himself.

Chris Small: “I wrote a piece for the MCW Website when you and Slex were going up against each other back in 2019 for the Title, talking about your parallel paths in wrestling, which is where I got a chance to learn about your history with Silva as a mentor, training, friend, rival prior to him leaving.

I came to Australia in 2017, and I feel like since the time I’ve been here there’s been a huge influx of success and signings of Australian and New Zealand stars across the major international promotions. It of course starts with Tenille Dashwood in 2011, then Matt in 2013. You growing your career during this time and with your own international success can you pinpoint, aside from sheer talent, a specific time or reason for this newfound recognition?”

Adam Brooks: “I think the Tenille and Matt stuff sort of…I want to say slightly began, eyes being on Australia. You also had Shane and Mikey (TMDK) doing stuff in NOAH as well. Then, we had a tryout in 2014, which is when they picked up Peyton Royce and Billie Kay. I think that tryout and those guys’ success in WWE got people saying ‘Ok, there’s some talent in Australia’.

Then of course Ospreay came, and me and Robbie [Eagles] worked with him. I think when that happened, the independent fans went ‘well we know who Will Ospreay is! Who’s this Adam Brooks kid he’s wrestling, who’d this Robbie Eagles guy?’ I think that made the independent fans realize there’s some good talent in Australia. From there, me, Robbie and Jonah (WWE’s Bronson Reed) did some stuff down at PWG that gave more indie fan eyes on the scene when they realized all of us are Australian.

I think 2017-ish kind of got that indie crowd looking at Australia in a different way. And ever since then, WWE comes once every two years to look at some guys. They actually did a little secret tryout at the MCW Academy before the MCG show. And then the night before that show they went and checked out a PWA (Pro Wrestling Australia) show in Sydney.“

You can catch the FULL interview over at the Inner Sanctum now! 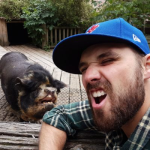 **Please note when this competition was launched, it was expected to run on Saturday 29th May. However due to COVID has been postponed. BUT...

Undoubtedly two of the top Australian wrestlers in the last five years were Adam Brooks and Mike Peterson. Although Mike Peterson is now retired,...